The Dutch Lions Capital Group USA LLC was founded in 2009 by Mike Mossel, Erik Tammer and Peter van der Molen. Besides the investment company they also registered the Dayton Dutch Lions FC LLC and purchased the license to play professional soccer in the United Soccer Leagues (USL) in Dayton OHIO.

The Dutch Lions FC clubs in Dayton, Houston and Cape Coral also have a Youth Academy in order to develop youth players to professional level. New York has a Training Academy. The Academies are based on the Dutch youth development philosophy, ranked worldwide in category 1 according to FIFA.

The Dutch Lions FC starts educating kids at the age of six. We offer the unique possibility for top players to play pro in either the USA or Europe. We pride ourselves for our extensive network in the global soccer world. Therefore we consider the Dutch Lions FC to be the “Gateway to professional soccer”.

The reason of starting (Dutch) soccer clubs in the USA is that there are 24 million active soccer players in this country (most in the world) and although the Americans dominate in almost every sport, there are almost no US soccer players performing at the world’s top level. We feel this is because of the lack of technical and tactical development at the younger ages (6-12). Early age development is something the Dutch school is known- and recognized for worldwide.

In case you are interested in joining our "Orange family" as a player, supporter, coach or investor, please contact us!

Mossel Sportmanagement B.V. is owned by Mike Mossel. He advises individuals and companies on performance improvement and teaches at Avans University in Breda. He also played for First Division clubs RBC Roosendaal (the Netherlands), KFC Turnhout (Belgium) and Cincinnati Riverhawks (USA) and graduated from Xavier University in Cincinnati (Ohio).

Both Erik and Mike went through the prestigious KNVB UEFA C and UEFA B Pro (former profesional players) training courses. 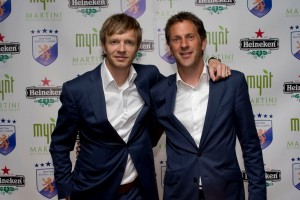 Through their partnerships, the Dutch Lions have several soccer organizations worldwide: