The team currently sits in 5th place with a 2-3-3 record (9 points). They started off with a tough opening weekend playing FC Pride on the road (2-2 draw) and Cincinnati Sirens FC (0-3 loss) in less than 24 hours. The team then picked up another point at home vs Columbus Eagles (2-2). In their second back to back weekend (of 4!) they played 1-1 vs Fire & Ice on Saturday and beat St Louis Lions 6-1 on Sunday, both on the road. They lost their away game 3-0 vs conference leaders Cincinnati Sirens FC, before beating St Louis Lions 6-0 and losing 1-4 vs Lady Victory FC in their third back to back weekend. They have four more games remaining in the 2021 season. 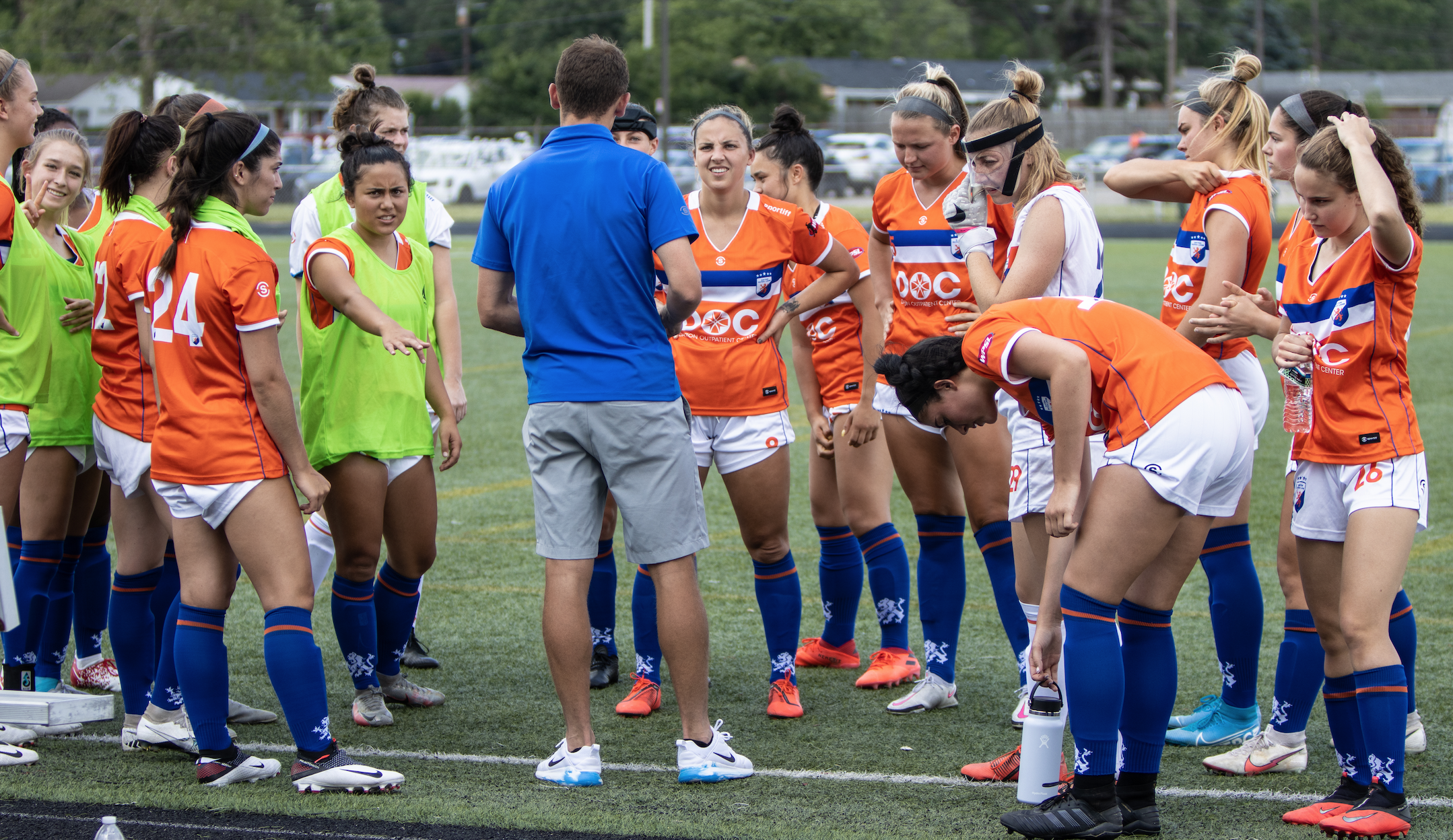 The new team in Oceanside might be half way through the season time wise, but the Lions have only played two league games sofar. Due to covid-19 implications in California the league started late and only has four teams in the Plymouth Division. The team. Lead by Head Coach Mario Fernandez, lost their opening game on June 6 on the road vs ASC San Diego 3-0, but won their second game 2-1 away vs Breakaway SC a week later. The team is back in action this Sunday when they play San Diego Strikers, also on the road. They finish with three home games on July 2, 7 and 18 at Fallbrook HS. 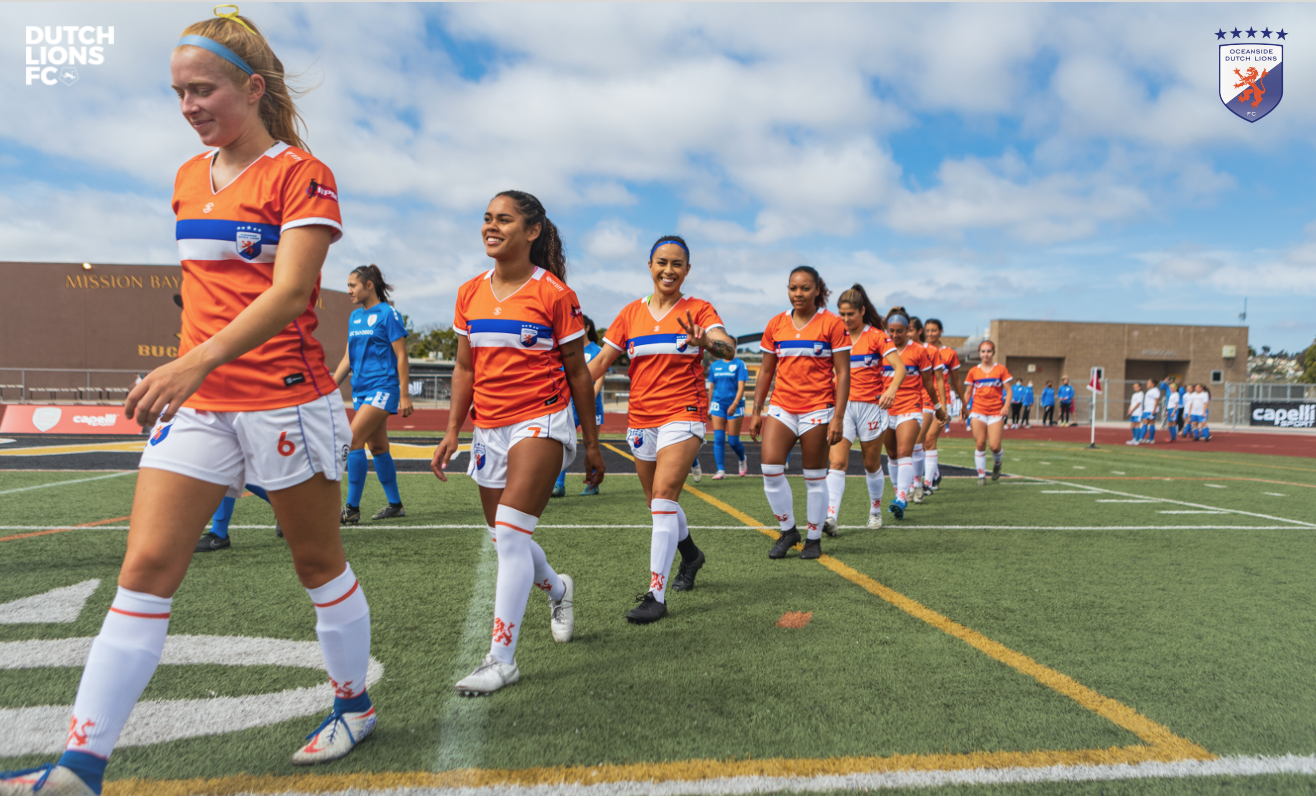 The team has had a tough season sofar with a new young team. After a 1-3 loss in the opening game at their new home at Bishop Verot High School they lost 6-0 vs CCSA and 0-1 vs Sunrise Prime. They then lost 5-1 on the road vs FC Surge and 0-4 at home vs Team Boca Blast. The team certainly has shown good moments but need more in a strong Sunshine Conference. The Lions have 4 more games remaining this season. They play their derby vs CCSA at home tonight at 7pm. 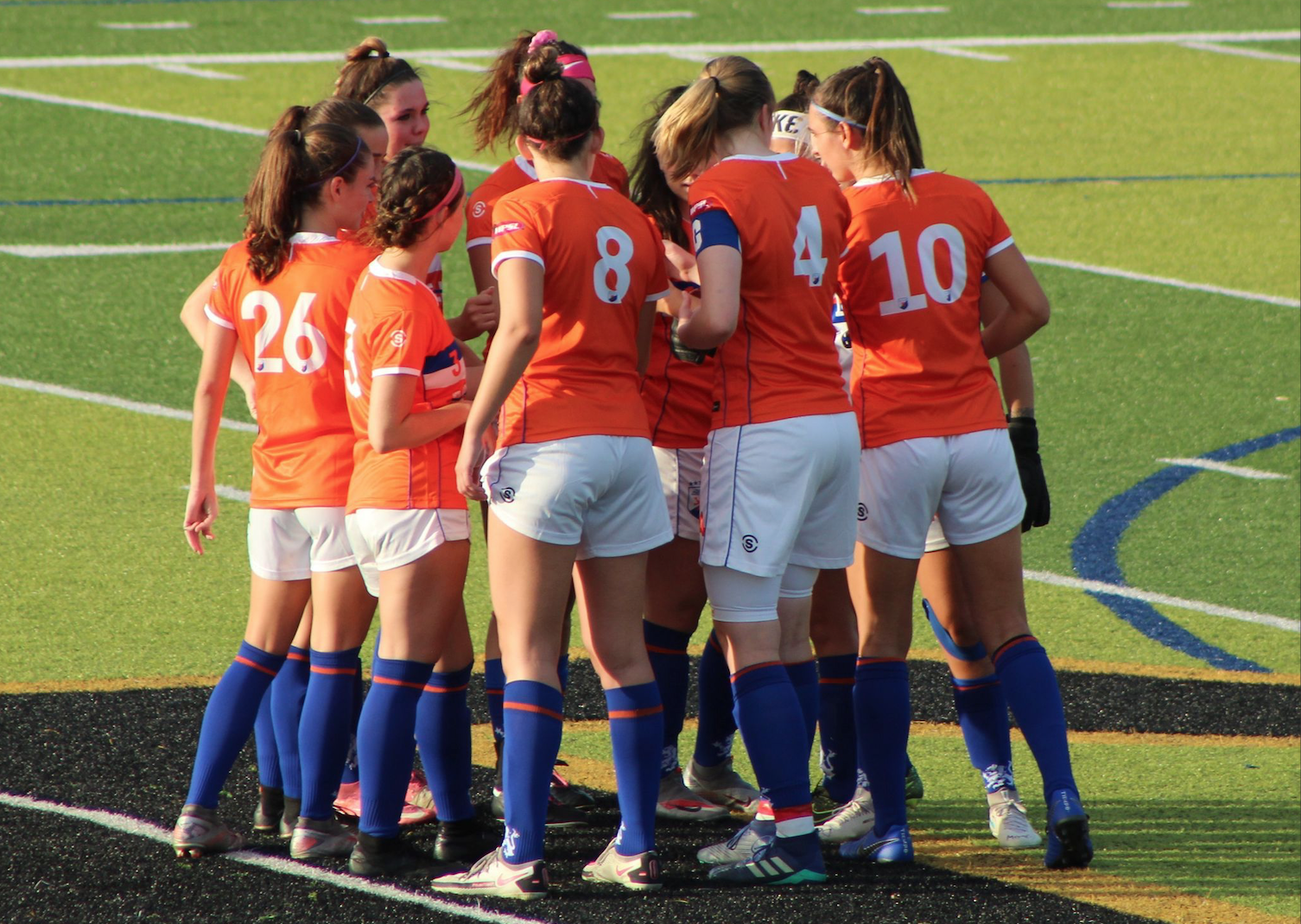 The team was supposed to play their inaugural game in 2020 already, but the season got canceled due to covid-19. But they certainly made an impact sofar. After six games they currently sit in first place with a 5-0-1 record. After a 1-2 win on the road vs Central Florida Panthers SC, they had a record 10-0 win in their inaugural home game vs Storm FC. Their third game ended in a 3-3 tie on the road vs Naples United FC, with Max Busch scoring the equalizer in the 90th minute. The Lions then beat Boca Raton (3-1) and Central Florida Panthers SC (4-1) at home and Boca Raton on the road this weekend with 1-3. The now face n2 Naples United FC at home tonight. After this game they have three more games remianing in the regular season in the Sunshine Conference. The numbers 1-4 go into the play-offs. The team, lead by Head Coach Robert Stoutenburg, has shown some really good soccer with possession play through the midfield. The team is currently also in the top 10 of the NPSL Power Rankings nationwide. 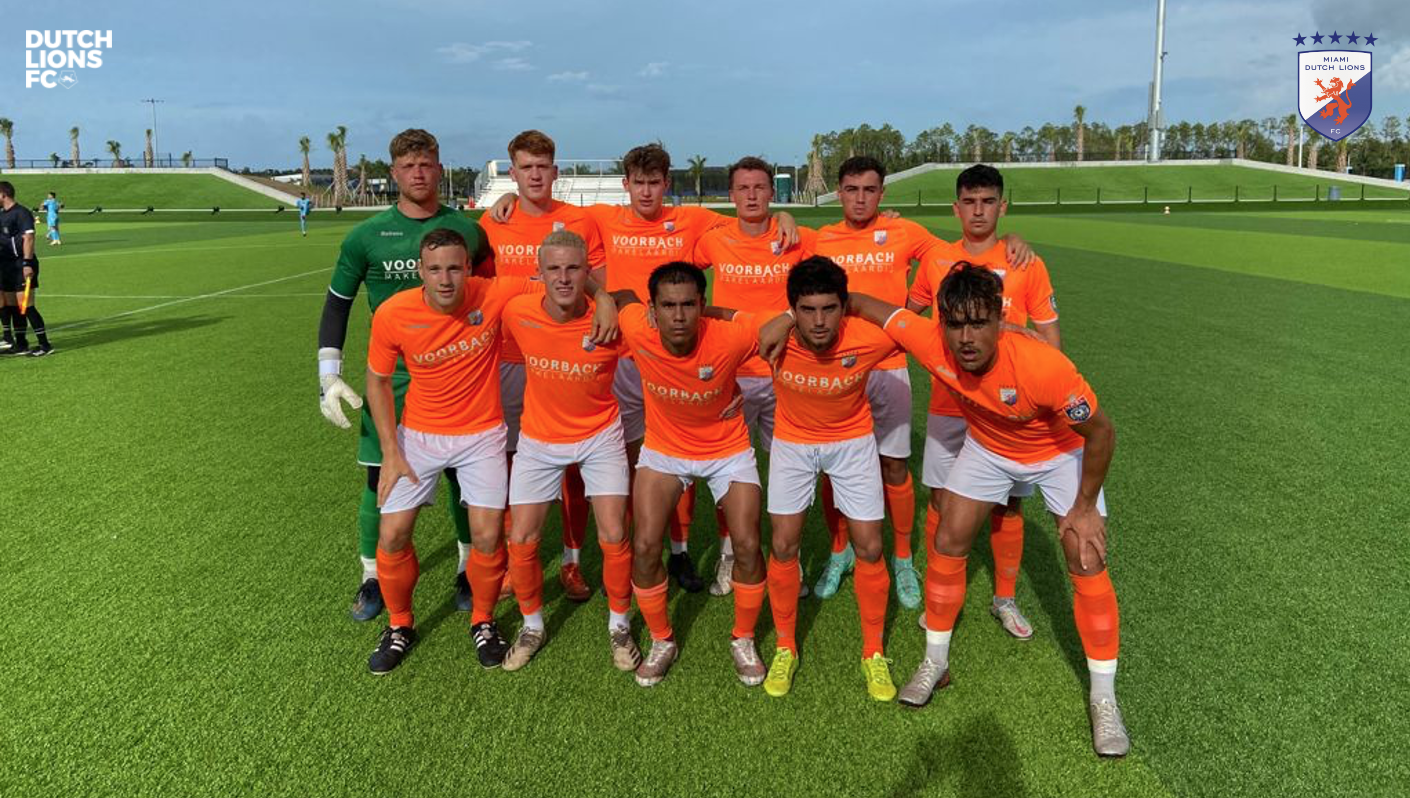 The new team had a great start in the Colonial Conference. After three solid wins (3-1 vs SJEB and 6-2 vs Athena SC, and 0-2 at Athena SC) the Lions played n2 CAFC Ospreys (4-0-1) this weekend. The Lions lost 0-2 and travel back to Ospreys tomorrow to try and put them back in 1st place. The team of Head Coach Michel Vanderhart is playing good soccer and is looking to finish strong in the second half of the season.

The new Dutch Lions FC team has already proved a worthy new team in the Lake Michigan Conference. After losing the inaugural game 4-0 on the road vs Chicago Red Star Reserves, the team bounced back with a 1-1 tie vs Milwaukee Bavarian SC, a 3-1 win vs Green Bay Glory and a 2-1 win vs Chicago City SC. After the Red Stars lost on Friday the team had the chance to come within 2 points of 1st place but after a 2-1 lead in the 70th minute vs Milwaukee Torrent the Lions lost 2-3. But besides the results the team has received a lot of compliments on their playing style. They have five more games remaining in the season. 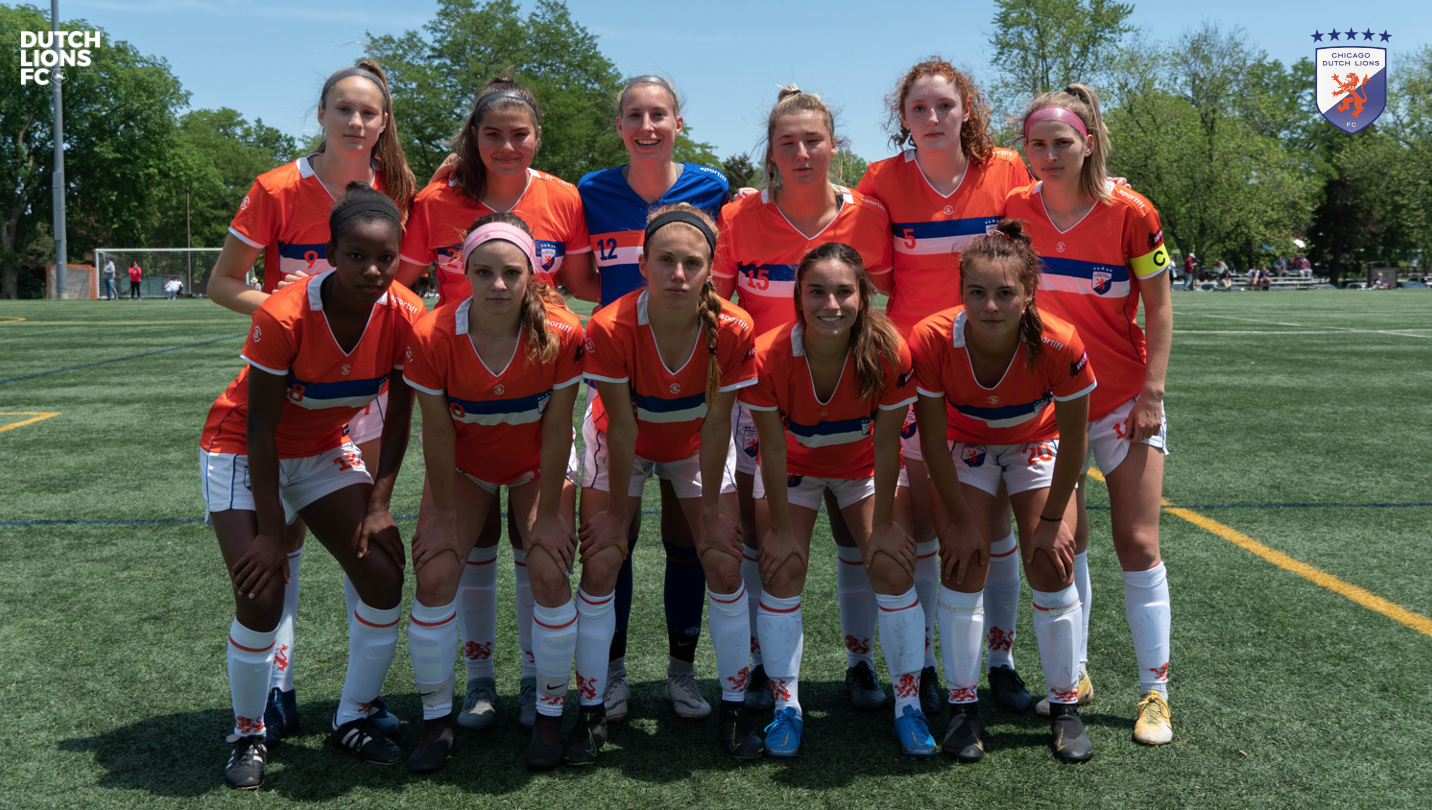 The team is having a tough season this year and are still without a win in a strong Great Lakes Conference. They started with a 1-2 loss in their opening game vs Kings Hammer in stoppage time with a man down. After three losses (5-2 at Toledo Villa FC, 0-5 vs South Bend Lions and 0-3 vs Kalamazoo FC the team showed improvements and were close to picking up points, but another goal in stoppage time at Flint City Bucks (1-0) and 0-1 vs Toledo Villa FC left them empty handed. They then lost 3-1 at Kalamazoo FC and came close to a draw again at Oakland County FC but lost 3-2. They play National Champions Flint City Bucks at home tonight. They have six more games left in the 2021 season.

Dayton Dutch Lions FC is also competing with a Men’s II and Women’s II team in the OVPL, as well as a USl Academy team in partnership with the Ohio Galaxies.